COVID-19 Policy: We screen all patients by checking temperatures and making sure they do not have a cough. We regularly sanitize as well as staff wear protective masks. 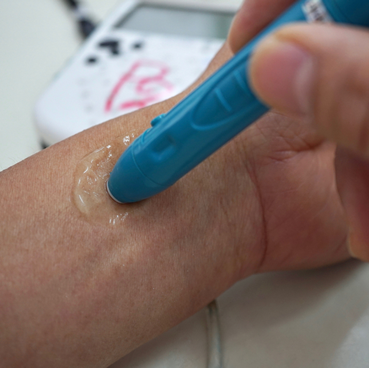 A vascular ultrasound is a noninvasive ultrasound method (also called a duplex study) used to examine the circulation in the blood vessels of the body.

Vascular ultrasound can be used to evaluate arteries or veins in nearly any part of the body, including blood vessels in the neck, abdomen, arms and legs. Non- invasive means the procedure does not require the use of needles or anesthesia.Unlike other imaging tests, ultrasound does not require radiation or contrast dye.

We use the vascular ultrasound for:
Evaluation of blood flow in the arteries and veins of the body to detect the presence, severity and specific location of disease. We can diagnose narrowing of arteries and determine the severity of narrowing. We can also use vascular ultrasound to diagnose blood clots in the veins of the arms and legs, a condition known as deep vein thrombosis or DVT.

The vascular ultrasound is a great test because:
it is non-invasive and does not require exposure to radiation or contrast dye, which can damage the kidneys. It is also a terrific test because it is one of the few that gives physiological information about blood flow in the arteries and veins. Ultrasound is also highly portable compared to other types of vascular imaging (such as CAT scans or MRI).

New technology is allowing us to use vascular ultrasound for:
assessment of vascular disease in the abdomen (such as kidney arteries, abdominal aortic aneurysms). Vascular ultrasound is also the most commonly used test to follow-up patients after they have undergone a vascular procedure such as a bypass graft or stent.

Copyright by 2022. All rights reserved.